Addressing media questions on Monday, President Trump announced that he is will to meet with Iranian President Hassan Rouhani if the Iranians are willing. He said they could meet at any time, with no preconditions. 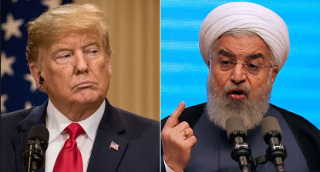 The comments come after a week of conflicting US statements on Iran, many from Trump himself. This time last week, Trump was threatening Iran with “consequences the likes of which few throughout history have ever suffered,” but then said he was willing to make a deal just days later. This was followed with reports, as recently as last night, that the US is preparing to attack Iran.

Trump said he views meetings as generally positive, saying one with Rouhani would “be good for the country, good for them, good for us, and good for the world.” Iran has not, as yet, responded to Trump’s comments.

Iranian state media, however, had reported earlier this month that Rouhani’s chief of staff told them that Trump had asked for meetings with Rouhani eight times in the past month, and was rebuffed. Iranian officials had said they were not interested in “one-sided talks under the shadow of a threat.”

Which isn’t to say Iran wouldn’t accept talks under any circumstances, but that Iran is clearly not interested in following the North Korea model of protracted US threats and ever-increasing sanctions even when the negotiations are ongoing.

Iran expert Trita Parsi expressed doubts that Trump would be able to get a “better deal” out of Iran, calling many of Trump’s demands “non-starters.” He added that the bigger deal would need more American concessions to be reached.

82 thoughts on “Trump Would Meet Iran President Any Time, With ‘No Preconditions’”