During his speech in Kansas City on Tuesday, President Trump said he is “ready to make a real deal” with Iran, adding that “Iran is not the same country anymore.” He also said this new deal would not be like the “disaster” deal made by the Obama Administration. 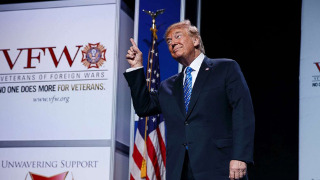 The statement comes just two days after President Trump’s bellicose Tweet threatening Iran with “consequences the likes of which few throughout history have ever suffered before.” Speculation was that this was an attempt to replicate the US strategy in North Korea, where threats were followed with successful diplomacy.

Yet Iran and North Korea are clearly dramatically different situations, not the least of which because Iran doesn’t have nuclear weapons, or a nuclear arms program to dismantle. Willingness to negotiate at all with Iran is a substantial difference in Trump Administration position, however.

Trump’s position that Iran is “not the same country anymore” is also a significant one, even if he didn’t elaborate in this speech. In previous comments, Trump has suggested Iran shows the US more respect since he withdrew from the P5+1 nuclear deal.

This could be a significant long-term aspect of Trump’s position on Iran, if he feels that presenting Iran’s behavior as improving is important to defending his decision to withdraw from the nuclear deal. When the president feels that a deal would vindicate his past policies, he seems much more eager to make such deals.