US officials have been blaming Syria for an alleged chemical attack Saturday since early Sunday. President Trump today Tweeted that missiles “will be coming.” Defense Secretary James Mattis, however, appeared cautious about the question of whether the attack was real. 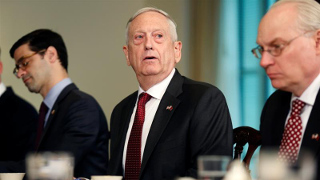 Asked specifically on whether there was evidence to blame Assad for the attack, Mattis told reporters that the US is “still assessing the intelligence,” and concluded that “we’re still working on this.” That sounds extremely uncertain, especially with the president suggesting an attack is imminent.

Mattis also indicated the Pentagon would be ready to attack when ordered. This is particularly concerning, as the US attacked Syria last year over an alleged Sarin attack, and nearly a year later Mattis recently admitted the US still doesn’t have evidence.

The reality is, that there really isn’t evidence to go off of yet. The Red Crescent has said they don’t think it happened. (This has been retracted, it is incorrect.) The Organization for the Prohibition of Chemical Weapons (OPCW), the only watchdog that’s ever going to investigate the matter since the UN rejected a Russian call for an inquiry, isn’t even going to meet until next Monday to discuss what to do. By then, the US may have already started the war.

The US and its allies seem interested in reaching a consensus on what happened without investigations, or evidence. Russia, by contrast, is deploying troops to the site of the alleged attack, which is seen in part as an attempt to preclude the US bombing the site, and destroying any evidence before  the OPCW can even get there.

It has already been confirmed, after all, that the US, Britain, France, and others are having discussions on exactly what sort of attack to carry out. Trump has indicated the attack will happen. There is no possibility of them being blocked by unfriendly facts about the situation, and likely that means they’ll decide to go in before such intelligence can be gathered.