In a Twitter screed directed at Russia, President Trump indicated that US missile attacks against Syria “will be coming,” and admonishing Russia to “get ready” if they think they can shoot the missiles down. In this comment, he further declared Syrian President Bashar al-Assad “a Gas Killing Animal who kills his people and enjoys it.” 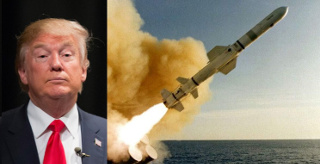 Trump has long expressed opposition to “telegraphing” US military moves. This is raising criticism about today’s announce that he’s literally doing that very thing, although US officials have effectively been telegraphing an attack on Syria since the weekend.

Trump followed that Tweet with another an hour later declaring “our relationship with Russia is worse now than it has ever been, and that includes the Cold War.” He said there is “no reason for this,” and said it would be very easy to improve ties, punctuating it curiously with “stop the arms race?”

Which wasn’t the end either. A little over an hour after that, President Trump declared “much of the bad blood with Russia is caused by the Fake & Corrupt Russia Investigation,” blaming President Obama and Robert Mueller for it.

Despite Trump’s suggestion that hostility toward Russia isn’t by design, the AP is reporting that Secretary of State nominee Mike Pompeo is telling senators that the “soft US policy” toward Russia is over.

While the US relationship with Russia has been getting worse and worse for months, the upcoming Syria strikes seem to threaten to make the situation far worse. The US attack is using an alleged chemical weapons strike Saturday in Douma as a pretext, with Trump vowing to make Syria “pay the price,” along with Russia and Iran for supporting Assad.

Both Syria’s Red Crescent (This has been retracted, it is incorrect.) and Russia’s Defense Ministry have been in Douma already, saying they found no evidence of chemical weapons use. The US and its allies resisted Russia’s call for an investigation at the UN, apparently unwilling to allow that to play out before they have a chance to parlay the allegations into a new war.

Russia isn’t taking the threats of attack lying down, however. They’ve begun jamming US drones flying over Syria, and have threatened to shoot down incoming US missiles. Perhaps most significantly, Russia is sending their military police into Douma, likely to keep the US from blowing up evidence for future investigations.

With the US and Russia both engaging in military actions inside Syria, often at cross purposes, the risk of direct conflict has always been there. It seems, however, that this new US attack is the most serious threat yes to start a direct US-Russia war, with no sign cooler heads are going to prevail.

62 thoughts on “Trump Says Missiles Will Be Coming at Syria, Tells Russia to ‘Get Ready’”