Two weeks of comments from President Trump on the possibility of a withdrawal from Syria “very soon” seem to have been resisted by nearly the entirety of his own administration. The military brass are in on this too, as they still envision the open-ended Syrian War they’ve been talking about all along. 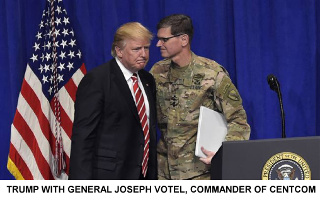 Centcom commander Gen. Joseph Votel, indeed, said he believes the “hard part” of the war is yet to come, as the defeat of ISIS now gives way to a protracted effort at stabilizing and rebuilding the former ISIS territory. Votel insists there “is a military role in this.”

This appears to be the anti-thesis of every foreign policy impulse set out by President Trump since the campaign. He’s long been resistant to both nation-building efforts open-ended conflicts. Yet having publicly talked up a pullout, he’s been remarkably quick to back down in the face of opposition.

The ill-defined US mission in Syria is just getting less and less defined all the time, and the only certainty about the war is that the US troops are staying, and any excused available to prevent a pullout will be employed.