The Pentagon Inspector General has released a new report on Friday regarding the Afghan War. The report contradicts administration claims that escalation of the conflict was making headway, concluding that “no significant progress” was made in the war in all of 2017. 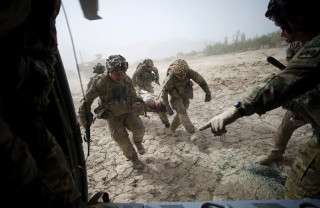 It is particularly noteworthy, as the Inspector General used actual metrics to gauge progress, noting that the stated goal was to get 80% of Afghanistan’s population under government control, and that the US is no closer to reaching that, with most estimates in the 60% range, still the lowest in the war.

16+ years into the US war in Afghanistan, they control less territory than ever. Despite a priority in striking opium poppy cultivation, that too hit a record in 2017. No substantial changes have been made since the escalation.

President Trump announced the escalation in August, committing more troops to Afghanistan and also forbidding the Pentagon from publicizing specific troop numbers. A recent report from the Special Inspector General for Afghanistan Reconstruction (SIGAR) noted that they weren’t allowed to release the metrics included in today’s report, on the percentage on the country under control. Suffice it to say, those metrics aren’t favorable to claims the war has turned the corner.

The narrative that the war has “turned the corner” has been a popular one for years, indeed over a decade, but the reality is that the war has been struggling throughout, and even claims of a “stalemate” are wildly optimistic.