With so much looting, arms smuggling, and various weapons trafficking efforts in Afghanistan, the Taliban have today declared the “Red Unit,” a group which has been credited with many of their recent attacks, as the formal “special forces” of the Taliban. 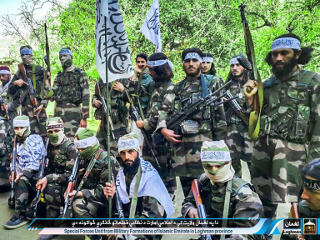 They’re armed like special forces too, with the faction making surprise overnight attacks on security checkpoints, quickly overrunning them, and killing Afghan forces along the way.

The Red Unit is described as having seasoned fighters with US-made weapons and night vision, along with laser-targeting equipment that put them at an overwhelming advantage over Afghan security posts in remote areas.

The group has been active for months, but not constantly so, carrying out flurries of attacks over the course of a couple of nights, then relocating to another area that is seen to be a key point. Kunduz Province seems to be the target now, with Afghan officials saying eight troops were killed Tuesday, and the Taliban claiming they’d killed at least 20.