While much of the early reporting on the Pentagon’s new Nuclear Posture Review has focused on acquiring smaller nukes and using them much more often, the details continue to slowly emerge, and show a scramble to establish more pretexts for nuclear first strikes. 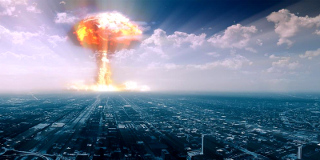 This includes cyberattacks. In hyping up the threat of major cyberattacks that might conceivably put lives at risk, the Pentagon’s document proposes the use of nuclear first strikes against cyber foes, presenting that as the only “realistic” option to such threats.

The “massive cyber attack” narrative is built around the assumption that a particularly severe hack could conceivably knock out a good portion of the US electricity grid, a major cellphone network, or even some of the Internet’s backbone.

Obviously no such hacks have ever happened, but officials have been eager to play them up as a possibility, both as a way to justify more spending on cyberwarfare, and to hype threats posed by whatever enemy they choose to hype.

Which is another problem. US assignments of blame in cyberattacks are rarely grounded in evidence or reality, but rather they blame whoever is politically expedient at the time, whether it’s Russia, China, or North Korea. Such reckless blame is relatively consequence-free when the US just responds with angry threats, but nuclear strikes could quickly start massive, civilization ending nuclear warfare.

Making nuclear war more likely is the general theme of the Nuclear Posture Review anyhow though, and while it’s drawing a lot of criticism for that from former officials and private analysts, it’s not at all clear that within the current administration, this bellicose and irresponsible posture isn’t the whole point.

The Trump Administration has spent its entire time in power easing restrictions on the military, and giving commanders more and more leeway on their operations. It might not be such a surprise for that to spill over into nuclear weapon policy.