Throughout the 16+ year Afghan War there have been winter lulls and spring offensives, and even in recent years, when officials have insisted they were continuing the fight right on through winter, operations still slowed substantially. 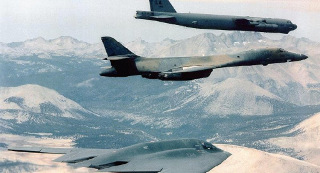 Not so this winter, however, where US airstrikes continued to escalate right through December, taking the 65 strikes from 2016 and increasing it over eight-fold to 455 strikes in 2017.That’s the highest number of December strikes in the entire war, more than double the figure from 2012, the previous high.

Relaxed rules of engagement, and President Trump’s interest in showing that the “gloves are off” are driving this increase, with officials expressing hope it will oblige the Taliban to agree to some sort of power-sharing agreement to end the war.

Analysts are doubting that, however, saying they believe military-centric strategy will “only make them more willing to fight,” and that Taliban leadership remain confident they can wait out the US onslaught.

It’s not clear how many casualties the strikes are even inflicting, with so many Taliban “wintering over” in mountain bases. At most intelligence officials say the increased strikes are increasing “friction” within Taliban leadership, though the Taliban has overtly split in the past and that didn’t defeat them either.

One thought on “US Escalates Afghan Airstrikes Through Winter, But Will It Matter?”