With the US having ignored a successfully negotiated third party enrichment deal with Iran and pushed forward a sanctions draft to the UN, they are reveling in the fact that the P5+1 appears to have signed on to the deal. 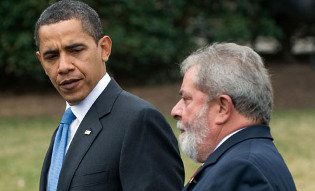 But not everyone is on board, notably Brazil and Turkey, two current UN Security Council members who fought tooth and nail to negotiate the enrichment deal the US-backed sanctions are looking to foil.

In addition to Brazil and Turkey another member of the Security Council, Lebanon, is firmly against the sanctions as well. The three will likely continue to fight against sanctions.

The current administration position suggests the US acted in extremely bad faith in its previous negotiations on the enrichment deal, and even if Brazil, Turkey and Lebanon don’t manage to foil the sanctions the timing of the announcement will likely do serious damage to US credibility abroad.