Defense Secretary James Mattis told reporters on Tuesday that the US is pushing Russia to prevent “a looming chemical weapons attack” in rebel-held northern Syria. This attack is something US officials have repeatedly talked up, and threatened military attacks over. 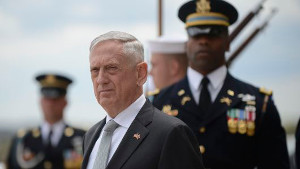 The US has made several mentions of this “looming” attack despite officials having conceded to the press several times that there is no evidence the Syrian military has made even a hint of deploying such arms.

Indeed, the only reason to think a chemical attack might be an issue recently is media reports, mostly coming out of Russia, that British special forces and Islamist rebels have been preparing to “stage” a chemical weapons attack in a rebel village to justify a US military intervention.

High-ranking Russian officials have repeatedly expressed concern about such a false flag attack. It is worth noting that US officials have not addressed this concern, despite it being impossible for them to be unaware of what a concern it’s become in Russia. At the same time, US officials keep hyping up a chemical attack that they have no reason to think would be about to happen, and would seemingly only be an expedient for another US attack on Syria.

4 thoughts on “Mattis: US Urging Russia to Prevent Chemical Weapons Strike in Syria”