In new comments, President Trump is claiming NATO “was essentially going out of business” before he came along, and now will be “strong ago.” He added that this is all because of him and his “strong tone” at the recent summit. 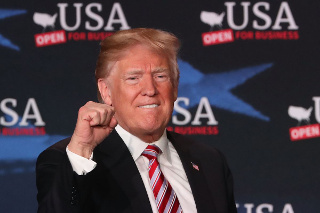 Trump was declaring victory over the summit earlier this month, with claims that the nations had committed to spending another $33 billion on militaries after the meeting. This new comment had Trump claiming “they are paying hundreds of billions of dollars more.”

Trump claimed that NATO Secretary General Jens Stoltenberg is now “the biggest fan of Trump,” because he came along and forced NATO to pay. The summit earlier this month was followed by a lot of conflicting reports, including the possibility that Trump threatened to withdraw the US from NATO.

Trump has been pushing heavily for all NATO members that have committed to increasing military spending to ensure that much of that money goes toward buying US-made weapons. Several nations have denied plans to increase military spending, particularly to the levels Trump has demanded.

25 thoughts on “Trump: NATO Will Be Strong Again Because of Me”