Following the NATO summit, President Trump says that he offered to help certain unnamed NATO member nations with “weaker finances” to be able to buy US weapons. He said the US would not finance such purchases but help get them on a payment plan. 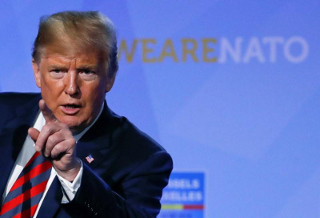 Trump’s push for major commitments for all NATO nations to increase military spending precipitously, and to commit a substantial percentage of that spending to equipment, was seen by many as a rather cynical attempt to get all of those nations buying arms from well-connected US companies.

Trump’s comments underscore that, as he says most of the NATO countries are wealthy enough to buy S arms on their own, and that it’s only a handful of “not so wealthy” countries that may need help. He said they should all buy US arms, because “The US makes by far the best military equipment in the world: the best jets, the best missiles, the best guns, the best everything.”

Most nations are reluctant to commit major portions of their GDP annually to buying these pricey US arms, however. Some NATO nations, like Turkey, have even chosen to buy Russian over US arms in recent years, a fact that doesn’t sit well with the administration.