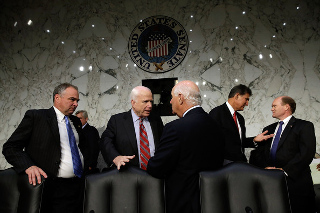 President Trump was reported by some sources as having threatened to withdraw from NATO during the most recent summit if he didn’t get his demands met. How serious these threats are is unclear, but the senators apparently feel it’s worth preempting.

If passed, the bill would require a two-thirds majority of the Senate to approve before the president can move to withdraw from NATO. It would also authorize the Senate Legal Counsel to challenge such attempts in US courts.

The NATO treaty requires a one year “notice of denunciation” before a nation can leave NATO. This is generally seen as unlikely to come up, with US leaders rarely hostile toward NATO, and even President Trump’s threats are not clear to have actually happened, and are often seen as empty threats.

In practice, this likely means the bill is little more than an expression of Congressional support for NATO, and slapping President Trump for taking a position they object to.