US media coverage suggests hostility toward diplomatic engagement with Russia as a matter of course. A new HarrisX poll, however, suggests that this is not the view of the majority of the American public, with 54% approving of President Trump inviting Russian President Vladimir Putin to the White House for a second summit. 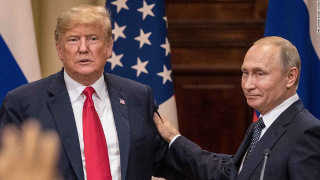 The first summit, held earlier this month in Helsinki, was seemingly successful, despite it being followed by negative media coverage and attacks from lawmakers in both parties. Trump followed this up by inviting Putin for a second summit, this time in the US.

American public support for such a summit doesn’t extend to Congress, however. On Tuesday, Congressional leadership announced that even if Putin does come to the White House, he will not be invited to address Congress or visit the Capitol building.

House Speaker Paul Ryan (R-WI) says addressing Congress is “something we reserve for allies.” Ryan added he was only okay with Trump and Putin meeting so long as the message is “stop violating our sovereignty.”

Congress focuses heavily on allegations of Russian interference in the 2016 US election, and there is bipartisan consensus, despite a lack of evidence to that effect, that Putin was behind all of it personally.

Protracted vilification of Putin would make a visit to Congress to deliver a speech a difficult matter at any rate. Explicitly saying he isn’t invited to do so, however, is clearly intended to be a blow to diplomacy.

58 thoughts on “Americans Ready to Welcome Putin, But Congress Won’t”