With the Syrian rebel factions having been defeated or negotiated surrender deals, the first rebels from the territory around the frontier with the Israeli-occupied Golan Heights have started to evacuate the area, heading north to the rebel-held Idlib Province. 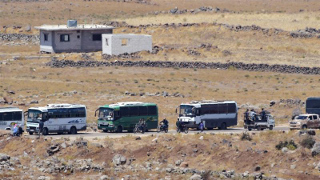 Various rebel-held cities, towns, and villages all accepted roughly the same deal, negotiated by the Russians. Under the deal, rebel factions agree to either submit to government rule, disarming and remaining where they are, or evacuate into the north.

Buses arrived in the southern part of Quneitra Province on Friday, and started loading up both rebels and any civilians that wanted to leave, departing for the north. Exactly how many have fled is ot entirely clear.

Reuters, however, reported that from the Israeli-held side of the frontier, they could see large numbers of cars and trucks packed with people withdrawing from a village on the Syrian side. This withdrawal leaves just a handful of ISIS-held towns along the southern border outside of government control, and presumably the next target of the offensive.