Syrian and Russian forces carried out hundreds of air raids against a handful of towns in southern Syria on Friday. Those towns are under the control of Jaish Khaled bin Walid, a small ISIS affiliate that is the last ISIS branch in the southern half of Syria. 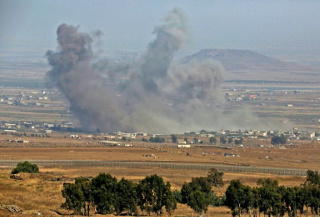 The Syrian Observatory for Human Rights reported that the strikes included barrel bombings, and had done “severe damage to infrastructure” in the towns, and had destroyed civilian neighborhoods. 26 civilians were reported slain across the area.

This ISIS faction has held territory near the Israeli-occupied Golan Heights since 2016, and has mostly avoided substantial fights with the other rebels in Deraa Province. With those other rebels defeated, however, they tried to attack Syrian military advancing into the area earlier this month and seem to be setting the stage for a major fight.

The Syrian military has recovered virtually all of the rest of the Deraa Province and is looking to totally recover their southern border. Heavy airstrikes have been a common tactic in this offensive, mostly trying to soften up rebels to force surrender, though in the case of ISIS it will almost certainly lead to a ground invasion.