In comments on Twitter early Thursday, President Trump faulted his critics, saying he believes they “badly want to see a major confrontation with Russia, even a confrontation that could lead to war.” 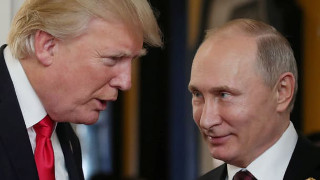 Trump has been saying he wants better relations with Russia since the 2016 campaign, and has been facing heavy criticism for that position ever since. This week saw Trump’s first summit with Putin since the election.

That summit went well, but Trump was roundly castigated by much of the media as well as the overwhelming majority of US lawmakers. They were indeed demanding confrontations of Vladimir Putin and were extremely angry that the summit went well.

Trump believes this amounts to pushing “recklessly hard” for war, saying “they hate the fact that I’ll probably have a good relationship with Putin.” Though these critics generally aren’t advocating for war itself, they have been advocating for years for ever-worsening bilateral relations.

It is this hostility toward Russia that has driven bilateral ties to their worst point since the height of the Cold War, and has them resisting even the hint of detente. While they aren’t necessarily expecting this to lead to war, they are determined to see it not lead to peace.

President Trump is being increasingly vocal about his annoyance at this resistance to his diplomatic overtures, despite avoiding a war with Russia seemingly being an obvious part of long-term US strategic interests.

But as President Trump firmly positions himself against a disastrous war with Russia, it is likely to escalate the rhetoric coming out of his critics, making their anti-Russia stance yet more overt and more willing to counsel an unthinkable conflict.