Monday’s summit between President Trump and Russian President Vladimir Putin ended with a relatively modest press conference. Things went well, by both leaders’ accounts, and it represented a small but significant attempt at improving bilateral relations from their recent lows. 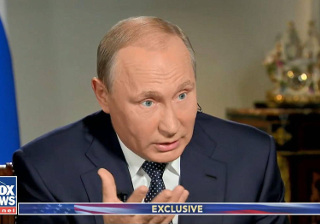 Deals were said to have been reached on cooperation on some fronts. Putin says he even told President Trump he intends to extend the New START nuclear treaty that is set to expire in 2021. But don’t expect any positive coverage of the talks in the press, let alone any votes of encouragement from the US Congress.

That’s because US hostility toward Russia being what it is, there is an incredible amount of bipartisan comfort with continuing that acrimony. Trump faced condemnations for even attending the summit, and more still for getting out of it without picking a fight with Putin.

Media coverage of the summit was uniformly negative, parroting disputed allegations of election meddling. Fox News’ Chris Wallace interviewed Vladimir Putin, and failing to get Putin to admit to anything, reporters praised Wallace for “giving Putin the grilling Trump won’t.”

Lawmakers were, of course, lining up to go after Trump over the summit. But now that the summit is over, their attention has shifted to trying to pass legislation that would attempt to undermine whatever modest progress toward a rapprochement Trump can be said to have made.

Which is really the center of most of the efforts to stop diplomatic progress. Allegations of meddling in the 2016 election have become “unquestionable” in the mainstream, both as a talking point and as a justification for picking new fights with Russia.

Trump has long expressed interest in improving ties with Russia, and this summit was actually one of his first real opportunities at doing so. Yet it will be difficult for this progress to have any permanence with everyone else so united in undermining it.