NATO’s summit has ended with a new declaration issued on the war in Afghanistan, some 17 years from the initial invasion. The declaration committed NATO troops to remain in the country for an indefinite amount of addition time. 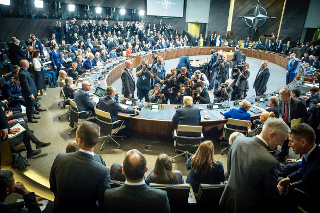 NATO Secretary-General Jens Stoltenberg says that the goal is “lasting peace and reconciliation,” and the declaration said NATO troops would remain in Afghanistan “until conditions change.” The declaration also committed to subsidize the Afghan military through at least 2024.

There is no timetable for conditions changing, and 17 years in the situation has if anything gotten progressively worse. Though the declaration made vague reference to “progress” on the ground, the Pentagon has made similar claims, and US officials have admitted that the lack of progress is likely to lead to another round of strategy reviews.

The statement did express support for Afghan President Ashraf Ghani’s peace efforts, which may point to similar statements from Secretary of State Mike Pompeo this week. Despite committing to continue the war, it seems that there is at least some recognition that talks, not combat, is the way the situation would ultimately have to be resolved.

3 thoughts on “Declaration: NATO to Stay in Afghanistan ‘Until Conditions Change’”