After shooting down a drone crossing in from Syria early in the morning, the Israeli Air Force attacked three Syrian Army posts on Wednesday, saying it was punishment for the drone itself, which they blamed on the military. 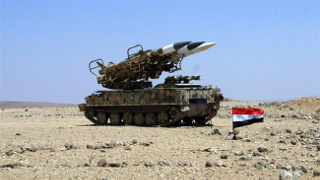 Syrian state media reported that the Syrian air defenses in the border areas intercepted some of the Israeli missiles fired in, stopping attacks in the village of Hader, and ensuring the attack caused only material damage.

There were no reports of casualties afrer the attack, either from Israel or Syria. This is the second time this week that Syria has reported intercepting Israeli missiles, and sustaining a military attack without any casualties.

Israel has previously reacted furiously to reports that their missiles were intercepted, and has used those interceptions as a pretext for further attacks. Though Israel never really looks very far for an excuse to attack Syria, previous interceptions, and firing on attacking warplanes has led Israel to quickly escalate strikes.