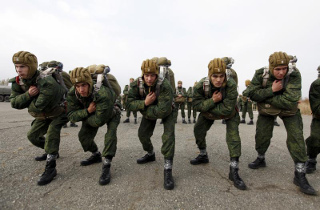 Worldwide military spending was slightly up over the last year, with the US amounting to more than a third (35%) of global military spending. Russia’s decline actually brings them down to the fourth highest spending military worldwide, passed by Saudi Arabia.

In March, Russia announced that over the next five years they plan to cut their overall military spending to less than 3% of their national GDP. That means substantial further cuts in the next few years, and will likely mean multiple additional nations will pass them in military spending.

Russia remains a substantial military power even with the cuts, of course. The general trend toward cuts shows that they aren’t envisioning large overseas entanglements, or the sort of World War 3 type of invasions that some NATO military figures have claimed. Russia is clearly moving toward a more defensive footing, and pocketing the savings.

12 thoughts on “Russia’s Military Spending Declines; US Now a Third of Global Spending”