While the Pentagon continues to grow US military spending annually, despite already spending many times more than any other nation in the world, Russia indicated Friday they’re heading in the opposite direction. The Kremlin has announced planned cuts. 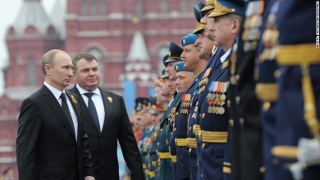 Kremlin officials say their intention is to cut military spending over the next five years, with an end goal being that, by 2022, they will be sending less than 3 percent of their annual GDP on the military. Currently Russia spends in excess of 5% in recent years.

Exactly what the end result will be isn’t entirely clear, of course, because we don’t know where Russia’s GDP will be in five years. Still, Russia is presently the 12th largest economy in the world, so dropping to 3% will likely put their military spending below multiple individual NATO member nations.

Russian officials say they intend to focus on improving relations with the United States going forward, and this may suggest they’re backing away from the escalating military tensions with the West in Eastern Europe.