An unspecified number of French special forces troops have crossed the border into Syria’s Kurdish region Thursday, entering the town of Rmelan. The troops entered from positions they’d previously held in neighboring Iraq. 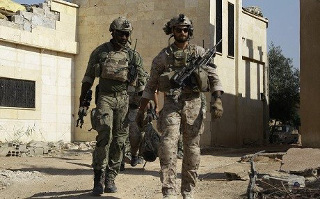 The exact size of the French military presence in Syria is unclear, but Turkish media report French troops are present at five separate military bases, all in northern Syria’s Kurdish territory. There are no French troops believed to be in the contested city of Manbij, however.

US Defense Secretary James Mattis praised French forces in comments to Congress, saying they’ve been bolstering US anti-ISIS operations in Syria for the past few weeks. He says the French are a big part of a “re-energized effort” to fight ISIS.

France’s substantial presence in Kurdish Rojava risks being a source of tension with Turkey. Turkey has been very public in its anger at the US for having troops in northern Syria, and President Erdogan has warned France not to make the same mistake the US has.

Turkey’s invasion of northern Syria has slowed in recent weeks, however, and despite a lot of talk of moving against the Kurds, and Western troops backing the Kurds, there’s been no sign of such an effort.

13 thoughts on “Mattis: French Troops Helping in US Operations in Syria”