On Thursday, Iraqi F-16s carried out a cross border attack against an ISIS site across the border in neighboring Syria. On Sunday, the Iraqi military reported that the strike had killed 36 people, all of them ISIS fighters. 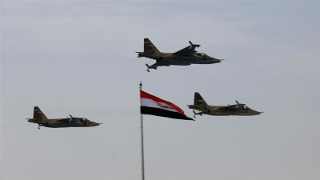 Iraqi officials are also claiming that the site targeted was an explosives factory. On Thursday, they didn’t offer any specifics on what was being targeted, beyond it having some ISIS affiliation. Iraq also said it was done with coordination from the Syrian military.

Strangely, the Syrian military hasn’t offered any public statements on the matter, either confirming the ISIS casualties or that an ISIS explosive factory was destroyed.

Remaining ISIS forces in Syria are mostly in Deir Ezzor Province, near the Iraq border. They have a small presence south of Damascus, but are also facing a heavy push from Syrian forces advancing into that territory.