A week after taking over the district capital, the Turkish military has issued a statement claiming full military control over Syria’s entire Afrin District. The Kurdish district was first invaded back in January, with an eye toward expelling the Kurds from border areas. 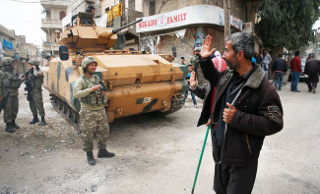 The fall of Afrin city last week was effectively the end of the fighting, though Turkish forces still had to make their way through a few scattered villages in the district’s south, and have also faced some resistance from Kurdish YPG forces.

Turkish officials have indicated that they are moving eastward from Afrin, attacking the town of Tel Rifaat. This likely is an effort to temporarily delay the confrontation with the US over the city of Manbij. Manbij is Kurdish-held, with a US military presence, and Turkey had previously said it would be the next target after Afrin.

Months of Turkish strikes appear to have had some serious impact on life in Afrin, as Turkey reported they’ve discovered a “hidden underground hospital” in Afrin. The site contained a lot of US-provided medical aid, and YPG uniforms, leading Turkey to conclude the hospital was treating “Kurdish terrorists.”