The civilian population is pouring out of Eastern Ghouta is ever growing numbers. The Damascus suburb, which is being invaded by the Syrian military, saw over 20,000 people flee on Sunday alone, according to Russia, with some 68,000 having left overall, many in just the past week. 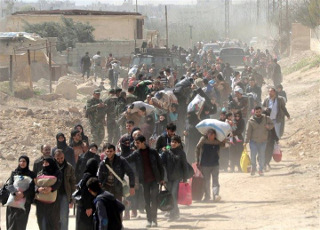 The Syrian Army has been scoring big gains in the past couple of weeks in Ghouta, to the point that President Bashar al-Assad was comfortable with going into the region to meet with troops. This is giving the public appearance that the fight is almost over.

Airstrikes continue to take a toll on civilians, with 30 reported killed on Saturday, but as the rebel-held parts of Ghouta shrink, there will be fewer and fewer places to strike. Interest in fueling more flight from the region is also likely to limit airstrikes, trying to get the population away from the combatants.

This has long been a priority for Syria and its allies, as Eastern Ghouta was the last substantial rebel territory around the capital city. The fall of Eastern Ghouta means increased security for the capital region, and will likely mean Syria can change their priority to fighting rebels in more remote parts of Syria.