Over the weekend, Turkish forces finally captured the Kurdish city of Afrin, in northern Syria. Monday saw the start of a transition to control from occupying rebels, the Turkish-backed Free Syrian Army (FSA). It wasn’t a very orderly transfer. 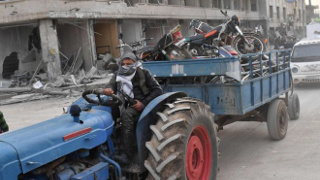 A Turkish group did get into the city to start delivering humanitarian aid, but it was overshadowed by reports that FSA fighters were engaged in mass looting of Kurdish-owned homes and businesses. Civilians continue to flee.

Turkish officials confirmed the incidents, saying they will investigate and take necessary measures to prevent future looting. They suggested some of the rebels were not following the orders given by their commanders.

This could be a hugely important matter as Turkey expands its invasion of Syrian Kurdistan. Turkey is not only using the FSA as irregular fighters, but intends to leave them in control of all that territory. The FSA has never been asked to occupy Kurdish lands before, however, and if Turkey can’t count on them to avoid scandals in doing so, it could derail their war.