Pentagon officials, and Secretary of Defense James Mattis in particular, downplayed the seriousness of a series of US attacks which killed in excess of 100 Syrian pro-government forces on Wednesday and led to accusations of a massacre. 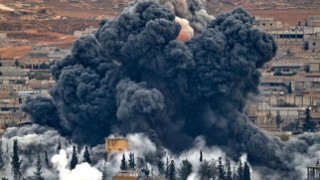 Congressional officials, including Sen. Tim Kaine (D-VA), expressed concern that the massive attack amounted to the US military stumbling into yet another military conflict, this time with the Syrian government and its allies.

Mattis rejected this, saying the killings were simple “self-defense” for an alleged Syrian attack that was half a kilometer away from a base the US troops were at. He said Congress would know if the US were entering a new conflict because they’d attack first, not respond.

Yet Pentagon officials have made clear in recent weeks that the goal in Syria is to keep their troops there indefinitely, and with ISIS defeated, the goal has transitioned to the imposition of a regime change against the Assad government, and fighting against Iranian forces that remain in Syria.

The Wednesday massacre, then is much less about the Pentagon blundering heedlessly into a new conflict, but engaging in the “new mission” they’d been talking up for quite some time already.