Adding to reports in recent days of growing Pentagon training operations in the US aimed at preparing for an attack on North Korea, House Armed Services Committee chairman Rep. Mac Thornberry (R-TX) has confirmed “very serious” training is indeed underway. 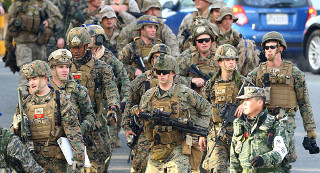 Rep. Thornberry says the administration is looking closely at what sort of preparedness they’ll need to engage in long-threatened “military options when it comes to North Korea.” This would be an attack, though recent reports have indicated the US believes they can get away with a limited attack that would lead to something short of full-scale nuclear war.

The US has been carrying out war games with South Korea for months, almost all of them themed around attacking North Korea. Such exercises are on hold until at least mid-March, but training continues in the US, and still seems primarily focused on such an attack.

With reports suggesting that a sneak attack on North Korea is also being contemplated in the next couple of months, the shift in training seems to be away from very high-profile exercises right on the border, toward less publicized exercises within the US focusing on specific preparedness for the attack.

13 thoughts on “Congressman: US ‘Very Seriously’ Training for Attack on North Korea”