While US wargames on the Korean Peninsula tend to get a lot of publicity, and the fact that there aren’t going to be any new US wargames there until at least March was treated as a huge positive, the US is far from backing off their aggressive military footing. 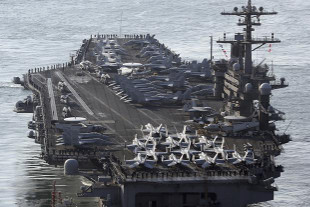 Rather, reports indicate that military operations have largely moved to the US mainland, with drills across multiple military bases preparing troops for the rapid mobilization efforts and combat troop deployments that would be needed for a new Korean War.

Fort Bragg saw a collection of US helicopters simulating moving troops through live artillery fire, while a separate exercise in Nevada simulated an outright military invasion under cover of night. Several more such operations are planned, with an eye toward getting troops to set up mobilization centers for a large-scale a precipitous overseas deployment.

On top of all of this, US special forces are planning to start a buildup in South Korea roughly coinciding with the start of the Winter Olympics, giving a further sense of urgency surrounding recent reports that the Trump Administration may be planning a sneak attack sometime around the Olympic games.

10 thoughts on “At Bases Across US, Military Prepares to Attack North Korea”