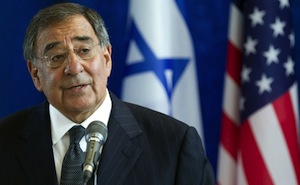 While this is nothing new in and of itself, President Obama is said to have told Panetta to “work directly” with his Israeli counterpart and to “favorably consider” the request with an eye toward sending the advanced weaponry as soon as possible.

Both the GBU-28 and the refueling aircraft would be key elements of an Israeli attack on Iran, with the long distance of flight and the heavily reinforced positions inside Iran, particularly after decades of threats to attack have given Iran plenty of time to reinforce those positions.

Israel has been seeking GBU-28 bombs for years, and while the nation reportedly did acquire some in 2009 both the practical matter of acquiring more and the propaganda value of having the US publicly send some on the eve of a major war with Iran would be significant wins for the hawkish Netanyahu government.