Speaking today on NBC’s Meet the Press, Senator and war-enthusiast Lindsey Graham (R – SC) said that the US Congress should “sort of shut up” about the illegal war in Libya, saying an effort to debate that president’s decision to launch the confilict would “empower Gadhafi.” 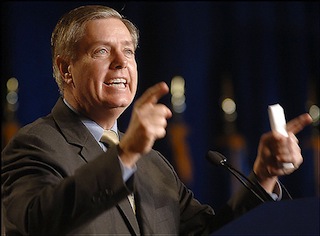 President Obama has claimed the War Powers Act doesn’t apply to the war in Libya, because it isn’t technically “hostilities.” This claim is in spite of legal advice to the contrary from both Pentagon and Justice Department councils that attacking Libya most assuredly is “hostilities.”

For Sen. Graham, however, the semantic argument doesn’t even enter into it. Rather he insists that President Obama’s position as “commander-in-chief” makes it inappropriate for Congress to exercise any oversight over who he chooses to attack.

Graham insisted that if the war ended, the price of oil would “double” because Gadhafi, who is barely able to maintain control over half of his country, would “take the whole region and put it into chaos.”

President Obama’s deadline to seek Congressional authorization was May 20. Even though his administration had insisted before this that the War Powers Act did apply, he changed course over the past week, insisting it is a special case.

21 thoughts on “Sen. Graham: Congress Should ‘Shut Up’ About Libya War”