The US government’s effort to parley its $260 million in flood relief donations in Pakistan into a meaningful amount of public goodwill (enough to, say, make the public forget about near daily drone strikes) has spawned an effort to conspicuously brand all aid items donated with large American Flag logos. It must’ve seemed like a good idea to somebody, but not to the aid workers on the ground. 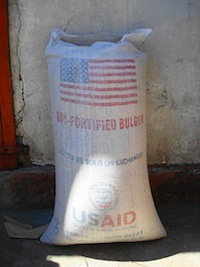 Indeed a number of Western aid groups are complaining that the US “branding” is making their aid workers appear to be proxies for the US government and is putting them at increased risk of being attacked by anti-US militants.

And Pakistan is awash in anti-US militants after nine years of war in Afghanistan and well over a thousand people killed in drone strikes in the tribal areas since President Obama took office. But it has surged even further in recent weeks, following US attack helicopters crossing the border and killing three Pakistani soldiers in a recent clash.

One aid worker suggested that the US logo should only go on packages “in parts of the country that are safe enough for American embassy staff to travel without a bullet proof car,” adding ironically afterward “but that would leave only Islamabad.”

In a nation where a good portion of the aid is being delivered by “banned” organizations that the Pakistani government is forever trying to tie to terrorism being in possession of conspicuously American aid is akin to having a target on one’s back. And despite US hopes of capitalizing on the aid the “branding” is little more than a liability for the aid itself, and certainly no cure for a decade of mismanaged policy.

One thought on “Aid Groups: US ‘Branding’ Could Endanger Aid Workers in Pakistan”