In an interview aimed at cementing his reputation as a “friend of Israel,” incoming British Foreign Secretary William Hague vowed to see British law changed so as to hold Israeli officials immune from war crimes charges, and promised to take a tough line against Iran’s civilian nuclear program, calling it the “most urgent thing” for him to tackle. 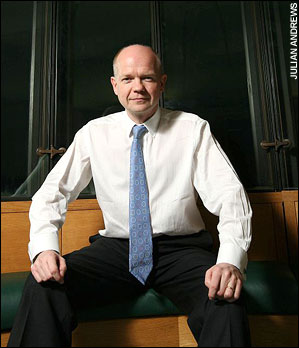 In fact, Hague seems to be taking a considerably more hawkish position on Iran than the Labour government had, and says that it would be a mistake to ever rule out military action against Iran, though his first preference seemed to be for “tough sanctions” against the nation. Officials in the Labour government had repeatedly referred to the prospect of a US attack on Iran as a disaster.

The news is likely to be welcome in Israel, where the media has been having a field day portraying Liberal Democratic leader Nick Clegg as anti-Israel and has warned his inclusion in the government poses a danger to Israel’s policy.

Hague himself has a mixed history with Israel, calling the 2006 invasion of Lebanon “disproportionate” while praising the 2009 invasion of the Gaza Strip. Despite his unconditional support for the Gaza attack, Hague has not openly condemned the Goldstone Report as so many others have.