Far from the cold reception indicated when Karzai first left for the US, the meetings between Afghanistan’s President and Barack Obama have sought to portray the two as close partners in the ongoing war. 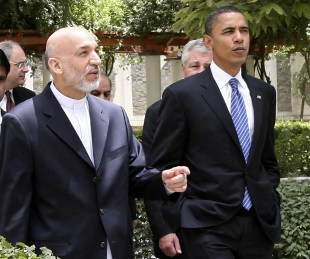 Obama insisted the war was “steadily making progress” and while Karzai conceded to “difference of opinion” on some issues, the two insisted that the media had “overstated” their differences.

This was a stark change from early April, when President Karzai claimed that the US and UN were involved in a conspiracy against him, and then later threatened to join the insurgency.

The US, for its part, openly refused to call Karzai an “ally” and then suggested that his erratic and impulsive behavior was because he was secretly an opium addict.

But that was April, and this is May, and in May the two sides are the dearest of friends, playing nice to the DC media. In June, when Karzai is back in Afghanistan and the summer violence starts kicking in, where the two sides will fall is anyone’s guess.