On Thursday, Vice President Mike Pence announced the US and Turkey had reached a ceasefire deal in northern Syria. The deal is intended to last 5 days (120 hours), giving the US time to evacuate Kurdish SDF forces from the area.

The Kurdish SDF issued a statement later in the day, saying that they are willing to abide by the ceasefire and leave all the areas in the safe zone, which US officials say Turkey will be in charge of.

This all seems like it’s going to calm things down, for at least a few days, but it’s not clear Turkey intends to totally stop its advance at the safe zone, and it’s unlikely the SDF would cede any more territory.

Since Turkey’s President Erdogan ruled out any ceasefire just the day before, Turkey was eager to downplay the deal as something short of a ceasefire, saying it couldn’t be a real ceasefire because they don’t consider the US a legitimate party in the fighting.

The other question in this deal is the Assad government, which is not a party to the deal, and faulted it as vague and confusing. The SDF had already given Assad’s forces two cities, and Syria presumably intends to keep those, not let Turkey and its rebel allies overrun them.

The overall US-Turkey deal was 13 terms, though it included lip-service to them both being fellow NATO members and other insignificant clauses. The meaningful terms were:

6. Turkey and the US agree that counter-terrorism operations must target only terrorists and their hideouts, shelters, emplacements, weapons, vehicles, and equipment.

7. The Turkish side expressed its commitment to ensure safety and well-being of residents of all population centers in the safe zone controlled by the Turkish Forces (safe zone) and reiterated that maximum care will be exercised in order not to cause harm to civilians and civilian infrastructure.

10. The safe zone will be primarily enforced by the Turkish Armed Forces and the two sides will increase their cooperation in all dimensions of its implementation.

12. Once Operation Peace Spring is paused, the US agrees not to pursue further imposition of sanctions under the Executive Order of October 14, 2019, Blocking Property and Suspending Entry of Certain Persons Contributing to the Situation in Syria, and will work and consult with Congress, as appropriate, to underline the progress being undertaken to achieve peace and security in Syria, in accordance with UNSCR 2254. Once Operation Peace Spring is halted as per paragraph 11 the current sanctions under the aforementioned Executive Order shall be lifted.

In short, Turkey stops attacking and the US won’t impose new sanctions. It’s not clear whether the US intends to actually comply with that, however, with the administration already discussing additional sanctions. 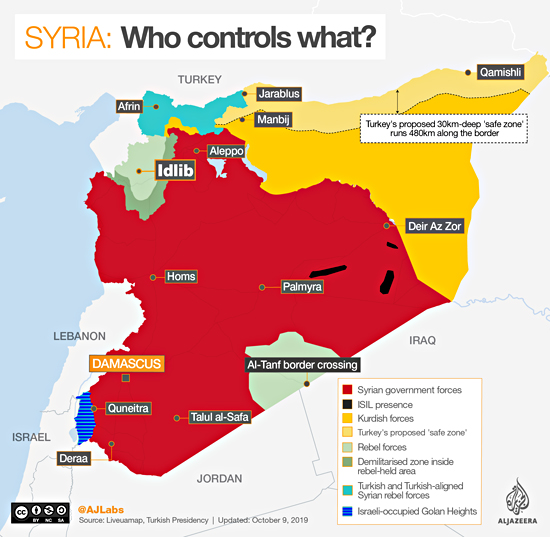 16 thoughts on “US, Turkey Reach Ceasefire Deal: Kurdish SDF Will Abide by Plan”