Days after Russian military officials criticized the US for adding to the number of destroyers deployed off the coast of Syria, coming amid mounting tensions and US threats to attack, Russia has announced naval wargames off the coast for its own substantial naval presence. 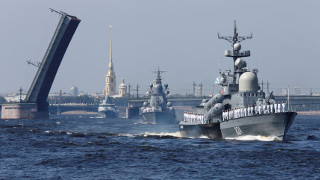 Russia has an estimated 25 ships and 30 jets that will take part in the wargames. The boats are mostly smaller frigates, but Russian officials have described this as the largest naval presence they’ve had near Syria since 2015.

Russian officials have expressed concern that the US is about to attack Syria, which follows several days of the US threatening to attack. Russia’s naval presence is clearly intended as a deterrent, if not for the US attack, than at least to preclude an attack on Russian targets.

This all comes amid reports Syria is about to launch an offensive against the rebel-held Idlib Province. The US has been talking up intervening if a chemical attack happens, while Russian media has reported a staged chemical attack might be planned to justify the US attack.