While the specifics on what exactly he is proposing aren’t at all clear, President Trump surprised Israeli officials and press on Tuesday night with comments announcing that Israel is going to have to pay a “higher price” during peace talks in return for him moving the US Embassy to Jerusalem earlier this year. 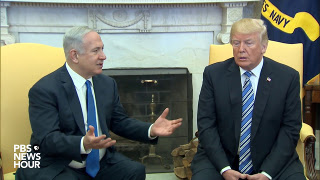 When the recognition of Jerusalem as Israel’s capital was announced, and followed by the embassy move, President Trump had suggested it was intended to remove the issue of the city’s status fro mthe talks. Now, he is promising the Palestinians will “get something very good” in return, “because it’s their turn next.” He did not elaborate.

Whether Trump’s strategy is at all plausible remains to be seen. Israel was quite happy to get the US recognition and embassy, while the Palestinians were furious. In both cases, this was expected to be a unilateral US move, and not the early part of a very long “trade” whose details neither party was privy to.

The problem is, now that Trump says it is the Palestinians’ “turn,” he’s going to repeat a process that angered a lot of people the first time, conceding something of Israel’s to the Palestinians in a seemingly unilateral way, inevitably to anger Israel in the process.

While Trump could conceivably just keep making such announcements, there is no reason to think either side is ever going to be satisfied with the whole package, when neither side had any role in negotiating it. Moreover, the longer this goes on, the more reasons both sides will have to refuse to join US-led talks.

6 thoughts on “Trump: Israel Will ‘Pay a Higher Price’ for Jerusalem Embassy”