Col Sean Ryan, a spokesman for the US-led coalition in Iraq, says that US troops are intending to remain in Iraq “as long as we think they’re needed.” He says this is vital to the stabilization efforts in post-ISIS Iraq. 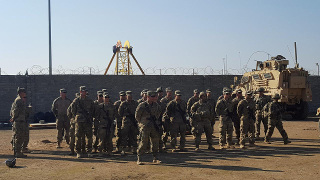 This is in keeping with other comments out of the Pentagon, where officials more or less uniformly envision a permanent US military presence in Iraq, and have not been shy in saying so. President Trump, however, disagrees, and has said he’s keen to withdraw troops once ISIS is defeated.

It’s not unusual for President Trump not to see eye to eye with the military brass on long-term troop deployments. Iraq seems to be unusual, in that instead of openly disagreeing with the president, the Pentagon’s comments appear to totally discount his opinion, and present their own plans as a foregone conclusion.

Col. Ryan said it was possible there could be some minor drawdowns of US troops from Iraq in the future, and that even this would depend heavily on the rest of NATO committing substantial numbers of troops to Iraq for training operations.

8 thoughts on “Pentagon Spokesman: US to Stay in Iraq as Long as Needed”