North Korea’s Rodong Sinmun, its main daily newspaper, issued a signed commentary on Saturday praising President Trump for the progress made on peace, and saying he should continue to act boldly. 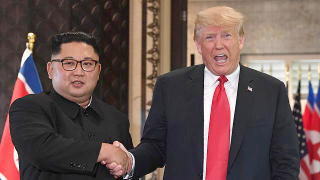 The commentary also loudly condemned Trump’s critics, saying he “faces too many opponents” domestically. They singled out some of Trump’s aides and bureaucrats of “distorting facts” and trying to undermine him.

The commentary also addressed the seeming stalemate on the question of ending the Korean War, suggesting that certain US figures are “distorting” how Trump sees the proposal, and are “boycotting” peace.

Their solution for this was again to urge Trump to act boldly and decisively, and unilaterally advance the peace proposal even over internal opposition. North Korea seems to be betting that they can convince Trump to come to the table on the plan despite him having shown little interest in advancing peace with the North in recent comments.

One thought on “North Korea Praises Trump, Bashes His Critics”