Pressing for members of the anti-ISIS coalition to contribute more to the Syria War, the Trump Administration has raised $300 million to “stabilize” the part of Syria under US control. This funding included $100 million from Saudi Arabia. 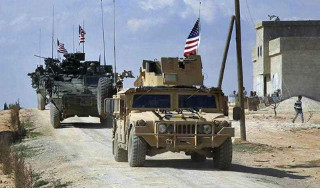 It’s not clear how this money is going to be spent. The money appears to be aimed entirely at the area controlled by the Kurdish YPG and its allies. US officials insist this won’t mean a military pullout, however,.

With that money now committed to Syria, the State Department is reiterating that the $230 million in US funds they’d initially planned to use on reconstruction is going to be completely withdrawn,and spent on other, unspecified US priorities.

This $230 million is part of the money that officials were saying on Thursday would be directed away from foreign policy around the world, despite Congressional objections. The State Department is now suggesting that they think they just spend that money on whatever, now that they’re moved it out of Syria.

7 thoughts on “US Redirects Syria Funds, Emphasizes It Is Not Withdrawing”