A week after Saudi Arabia attacked a school bus full of children in northern Yemen, killing at least 42 of them, munitions experts are confirming that the bomb itself which hit the bus was provided to the Saudis by the US. 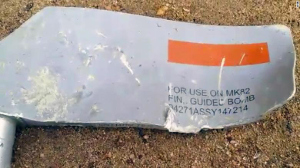 The bomb was identified as a US-made MK-82, a 500 lb pound made by Lockheed Martin, and sold to the Saudis during one of the many arms deals reached in recent years to supply the Saudi war in Yemen.

This further complicates the US government’s intentions to continue the war over Congressional attempts to limit it, and once again underscores US culpability in the many war crimes being committed in Yemen.

Saudi officials have defended the attack on the school bus, saying it was a “legitimate military target.” The US has largely not discussed the attack, but has tried to deny any involvement, clearly not true when it was a US-made bomb dropped by a US-made plane refueled by the US Air Force.

The 2019 NDAA, signed earlier this week, explicitly limits US involvement in the Yemen War until the Pentagon gives a report to Congress about war crimes. President Trump’s signing statement indicates he will not comply with this.