A conference of House and Senate Armed Service Committee members have offered their joint version of the 2019 National Defense Authorization Act (NDAA). The annual military funding bill often includes a lot of policy-related amendments, and this year’s is no different. 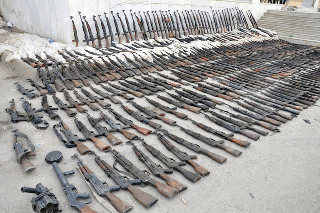 Perhaps most impactful, at least in the near term, the bill also limits US military involvement in Yemen in the immediate future, until both the UAE and Saudi Arabia “demonstrate” support for the UN peace efforts, resolve the humanitarian crisis, and cut down on civilian deaths.

Another amendment that managed to survive the joint conference effort was Rep. Tulsi Gabbard’s (D-HI) “Stop Arming Terrorists Act,” which blocks all funding for arming Syrian rebels until the administration provides a report detailing how they plan to ensure that they aren’t arming terrorist groups. Such a report was already supposed to have been offered in February, but never was.