Israeli officials announced on Wednesday that they plan to carry out massive increases in military spending every year through the next two decades, with an eye toward getting military spending up to 6.0% of the national GDP. 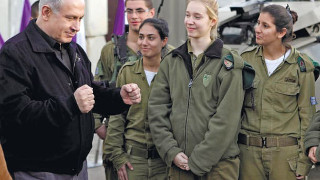 This would be the second highest military spending by GDP in the world among major economies. Only Saudi Arabia spends more, at about 10%. Israel has spent similar percentages in the past, but may struggle to justify such large hikes going forward.

Prime Minister Benjamin Netanyahu credits a free market economy as allowing such massive increases, and this spending increase assumes Israel’s GDP will grow to $500 billion, up from its current $350 billion. Whether it can sustain such growth while throwing such a huge percentage of its economy down the drain as military expenditure is unclear.

Netanyahu, however, believes that this huge military would “increase Israel’s equity in the eyes of other countries and increase its diplomatic prowess.” What that actually means is anyone’s guess, as Israel tends to be on bad terms with most countries most of the time, and there aren’t a lot of countries with whom Israel might have a rapprochement if its military was just a bit bigger.

Selling the plan domestically may also be a challenge, as Israel’s military doesn’t exactly do a lot of war-fighting these days, despite the posturing of cabinet members. Israel simply doesn’t need a $30 billion annual military budget to occasionally fire a tank shell at Gaza and carry out airstrikes at random Syrian military bases.