On July 19, an airstrike hit a number of civilians in Afghanistan’s Kunduz Province, killing 14 of them. The Afghan government originally took the blame, though later the narrative was revised to a US strike. Now, US officials say the incident never happened. 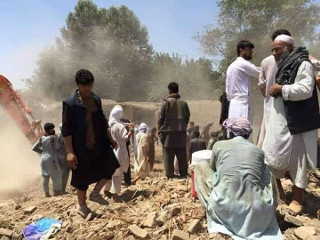 While it’s not unusual for the Pentagon to shrug off reports of civilian deaths in airstrikes by claiming there was “no credible information,” this is a particularly difficult time to do so, because Pentagon officials had already confirmed the attack when it happened.

At the time, despite Afghan officials confirming already that everyone dead was civilian, the Pentagon claimed all 14 were “Taliban fighters.” This was particularly ridiculous since several were young children, one only three years old.

The Army is claiming to have reviewed Afghan government findings, too, which the Afghans made clear at the time concluded the incident happened and civilians were killed. It’s not at all clear how the Pentagon can justify going from that to denying the incident happened.