US claims that the Taliban’s Friday invasion of the Afghan provincial capital of Ghazni was “inconsequential” appear to have been premature. More Taliban raids came, and over the course of the weekend, both the city and surrounding area have been heavily contested. 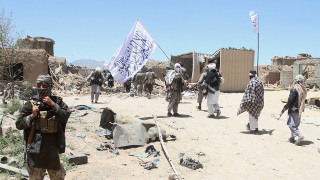 By Sunday, Taliban forces had seized control of most neighborhoods in the city. Over 100 Afghan police and soldiers were killed in the fighting. Ghazni’s Hospital director put the toll at 113 killed and 142 wounded, saying the hospital is running out of room.

Taliban statements have claimed effective control of Ghazni since late Saturday, and the most recent fighting centers on the governor’s office and police and spy agency headquarters. While Afghan officials were previously denying the Taliban had taken the city, they’re now complaining that the reinforcements sent to the area haven’t done anything but establish a base for themselves.

Not that they didn’t try. The Taliban has been sieging the prison for days, and police inside were running low on ammunition. Army reinforcements showed up with supplies. The problem is, the police were using Soviet guns that use Russian-made ammunition, while the army uses US guns, and brought ammunition they couldn’t use.

City police checkpoints are now mostly being manned by Taliban, and separate Taliban invasions also overran at least two neighboring districts just outside the city. This reflects a substantial change in territory control in the east, as Ghazni is on the main highway connecting Kabul to the country’s south.

Ghazni’s police chief claimed that as many as 500 Taliban were killed in the fighting as well, Though this hasn’t been confirmed elsewhere, the Taliban appears to have no shortage of additional fighters, having sent invading forces from several surrounding provinces.