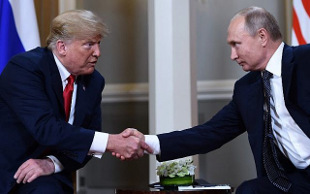 The details were leaked in a document entitled “Dialogue on the Issue of Arms Control,” with Russian officials saying that Putin shared the contents with President Trump. It is believed that not all administration officials were privy to this.

Putin, however, has been very clear about wanting to get started on new arms treaty talks. In particular, he noted that to get an extension of START would require talks to begin almost immediately, if they are to have any chance of being finished in time.

The White House declined to comment specifically on the leak, but noted that Sen. Rand Paul (R-KY) had hand-delivered a letter to Putin’s representative in Moscow, which suggests this may be related to the process.

Russian officials were less happy, with a spokeswoman for Russian Foreign Minister Sergey Lavrov complaining about the leaks, and saying they aren’t clear how Russia can possibly talk to the US when they can’t keep even the content of negotiations secret.