In comments on Tuesday, State Department spokeswoman Heather Nauert called on Russia to withdraw its military entirely from the two breakaway Republics of South Ossetia and Abkhazia. The US does not recognize the regions’ independence. 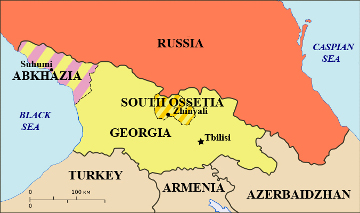 The comments come 10 years after the brief Russo-Georgian War, during which Georgia attempted to attack South Ossetia, ended up fighting Russian troops therein, and fairly quickly lost. In the aftermath, Russia recognized the independence of both regions.

Both South Ossetia and Abkhazia have historical reasons for not considering themselves part of Georgia, despite nominally being part of the Georgian Soviet Socialist Republic during the Soviet era. The Georgians, however, never recognized this, and to the extent that Russia has, the US has taken the opposite position.

The regions are a long-term problem for Georgia, which has ambitions for joining NATO. NATO clearly would never accept anyone as a member state who has existing territorial disputes with Russia, and accuses Russia of occupying parts of their territory, since this would mean an immediate NATO-Russia war.

The State Department insists they support Georgia’s “territorial integrity” as including those regions, and to the extent that continues, it also follows that Georgia will never be able to advance toward accession into NATO.