Since the Saudi invasion of Yemen in 2015 a lot of people have died. Saudi airstrikes have killed thousands of civilians. Huge numbers of combatants have died. Starvation and lack of medicine has taken many, many more. Yemen even saw the worst cholera epidemic in human history. 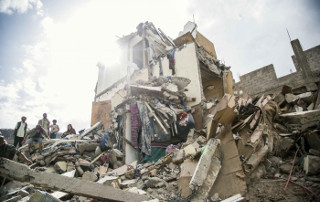 So how many have been killed? 10,000 is a popular estimate, coming from the UN. The estimate, however, is from August of 2016, and a lot of major casualty incidents have hit in the two years since.

There hasn’t been an official estimate since, and while that reflects the reality that we just don’t know how many people are dying in Yemen, it also reflects what appears to be limited interest, at least among official agencies, in pinning that figure down.

Saudi Arabia is likely a big part of that, as many of the regular airstrikes where the Saudis kill scores of civilians are denied by the Saudis to have happened. Since the Saudis have managed to keep the UN from investigating their war crimes, it would follow that they prefer not to have gaudy official figures being thrown around to answer for.

Still, 10,000 is ridiculously low at this point, with even conservative estimates from analysts suggesting more like 50,000 combat deaths. When one factors in starvation, or that time the Saudi naval blockade prevented any insulin from entering the country for so long that much of the diabetic population surely died, it’s vastly higher.

Where NGOs have attempted to count deaths, they come up with thousands here, thousands there, and always with the caveat that the actual figure is “likely much higher.” As interested as the international community was in regularly increasing the estimated death toll in Syria, where they seemingly had little more access to reliable data, in Yemen there seems to be little interest, and a tendency to keep falling back on that 10,000 dead figure, two years later.